Welcome to the BlindGuide Support page.

Below you will find a number of frequently asked questions when using our BlindGuide app’s. If your question is not listed or need support please feel free to give us a call or send a message.

My GPS location is not accurate

The standard tablets and telephones (iPhone and Android) currently have an accuracy of approx. 3 to 4 meters (2018) when it comes to GPS locating. In order to optimize the Augmented Reality experience, a more accurate GPS positioning on the tablet or telephone is important. With our partner Trimble and Geometius we have 1 demo-set of the Catalyst including subscription for centimeter-accurate positioning available that we would like to come and demonstrate.

To use the Augmented Reality function of BlindGuide it is necessary that your smartphone has the following sensors:

Below we explain what these sensors are for.

With the Global Positioning System (GPS) we can determine our position on the Globe. Our smartphone determines its position on earth by using a system of at least 24 satellites running in six fixed orbits, in a fixed time around the earth and each transmitting its own signal. The accuracy of the location varies, depending on the system and the conditions.

In practice, the accuracy in the open field is between three and five meters. Then the reception conditions are optimal. In a city area with lots of tal buildings the accuracy can be reduced to ten or twenty meters. In very narrow streets or indoors, the GPS reception can be significantly worse or even fall away. The accuracy of GPS relies heavily on a direct view of the satellites. In principle, three are required for a location determination, but a fourth is required for an accuracy up to a few meters.

Both Android and Apple smartphones use not only GPS but also the distance to known Wifi networks and GSM masts to improve the accuracy of the positioning. Developers have access to these options to ensure proper positioning.

Most smartphones know in which direction you are moving. These models contain a digital compass. It works on the basis of a magnetometer or also called a geomagnetic sensor. This is a small chip in the smartphone that can measure magnetism in multiple directions. Just like a traditional compass with a needle, your smartphone always knows where it is north, east, south and west.

The magnetometer is also used for other applications than the compass. For example, VR and AR devices often contain a magnetic control button and it is important for the Augmented Reality (AR) function that we know in which direction you are looking so that we can also place the cables and pipes in the right direction.

A gyroscope measures the rotation of your smartphone on 3 axes (X, Y, Z). It can be determined in which position the device is located: straight, slanted, horizontal, standing. By linking the gyro with the accelerometer (see later), the speed of movement is measured in addition to the direction. Finally, by combining it with the digital compass, it becomes possible to measure and record movement along six axes.

The best known application where the gyroscope is used are games. Just think of racing or shooter games where you maneuver the smartphone in all sorts of directions. Ok in the BlindGuide AR app use the gyroscope to correctly show the cables and leads on the screen of your smartphone.

The accelerometer with the force of an acceleration in a certain direction (X, Y, Z). Consider the WII controller for applications of the accelerometer. That is the simplest explanation of how the sensor works. Simply put, it is a movement meter. For example, he can determine the shaking, vibrating or tilting of a device.

A gyroscope only determines the position in which the smartphone is located, the accelerometer measures the power of any movement that goes with it. Many pedometers can not do without the accelerometer in your smartphone. With the sensor you can also register G-forces, detect earthquakes and also measure the acceleration of an accelerating car.

My KLIC zipfile does not work in Augmented Reality

It is correct that the standard KLIC zipfile does not work in the Augmented Reality (AR) function. To show the cables and pipes from your KLIC report in AR you will have to have these converted by our online ETL Tool. This Online ETL tool also offers the possibility to convert various additional geo spatial data into 1 file that we can load in the BlindGuide AR app. You can then think of data such as:

Our online ETL Tool is still under development. As soon as it is ready and available online we keep you informed via our website and social media. When you are a participant in the closed beta test, you can send us your data until that time, so that we convert it into a file that you can read into the BlindGuide Augmented Reality app.

Does BlindGuide store the location of our app users

In our BlindGuide app we ask permission to access your GPS location. Without this data, the app can not determine where you are in relation to the utilities and other geo sptaial data. This is one of the most important applications of the app.

We do not store this information. The location data is not stored anywhere, even on the smartphone or tablet of the user.

Do we link this data to a person?

Also on this question the answer is NO. We do not have personal data to link a person to a location. The location data is only used in real time for an optimal user experience. Here, too, we value your privacy.

We value the privacy of our website visitors and customers very much. That is why we have put everything in place to ensure the privacy of our customers. We therefore comply with the requirements of the General Data Protection Regulation GDPR, the Telecommunications Act and other privacy laws and regulations. You can read in more detail how we deal with personal data and how to collect them In our privacy statement . </ p>

The KLIC Zip file does not apear to load

How can I enable or disable the diferent layers

With the layer key you can enable or disable the various layers (including dimensions and annotations) of the grid operators.

By default, all layers are shown. By keeping the layer pressed you also adjust the transparency of the layer.

You can open the KLIC Zipfile on your iPhone directly from your email. Click on the icon in the top right corner of your screen (see image left)

Then search for the BlindGuide KLIC app in the list of app’s that you can use to open the ZIP file and click on it. As shown on the right

The KLIC data is then loaded automatically in the BlindGuide KLIC app.

If you open the Klic-ZIP File at the excavation site, you will see the GPS icon where you are within the (Klic) drawing.

It is important that you have enabled the GPS functionality of your smartphone or tablet.

Please note that (in 2018) the standard mobile phones and tablets have an accuracy of approx. 3 to 4 meters when determining GPS position. BlindGuide has, together with her partner Trimble, a solution available to get a centimeter acurate positioning.

When loading an original KLIC zip file in the free BlindGuide Klic App all attachments of the KLIC-notification can also be viewed. 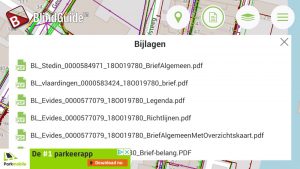 By clicking on the ‘Appendices’ button you will see all appendices such as letters from network administrators, home connections etc.

All contact details of the interested grid operators are also loaded as soon as you load a KLIC Zipfile.

By clicking the ‘Contacts’ button all relevant contact details will be visible. If you use the free BlindGuide Klic App on your iPhone, you can also call or email these contacts directly from this menu. (This version will also be available for Android soon).

Where can I order a KLIC Zipfile

When you are going to dig mechanically in the Dutch underground (For example when digging a pond or a swimming pool) it is legally required to do a KLIC report.

You report this digging project to the Land Registry. You are advised to request a Klic notification no later than 20 working days and no later than 3 working days before you start digging. Make sure you can send a copy of your identity card, digitally or by post.

In this video we explain how the ETL Tool works

If you still have questions after watching this video please do not hestitate to contact us. You can call us on +31 10 2617090 or use this contact form.

I did not receive a confirmation email

If the confirmation email from BlindGuide is not in your junk mail folder, you can still check if you have entered the correct email address. A typing error was quickly made. Common error, for example, is entering the domain of your e-mail incorrectly, such as example@hotmail.com instead of example@outlook.com etc.

I got an error message saying "This e-mail adres has already been registered. We could not complete your registration"

Can I also add GIS information to the KLIC Information?

Yes, if you can export from your GIS software to a .json or .GeoJSON format you can add it to your KLIC or AutoCAD information in the ETL tool.

We value the privacy of our website visitors and customers very much. That is why we have put everything in place to ensure the privacy of our customers. We therefore comply with the requirements of the General Data Protection Regulation GDPR, the Telecommunications Act and other privacy laws and regulations. You can read in more detail how we deal with personal data and how to collect them In our privacy statement . </ p>

Have you found something that we should look at?

We have put a lot of love, time and energy into making BlindGuide AR and KLIC app and the ETL Tool. Despite that, it may be that you find something that does not work properly. We would really appreciate it if you could pass this on to us. You can do this by sending us a message and using the form below

Outside The Netherlands
The BlindGuide AR Maps app for use outside of the Netherlands is available in the Google Play Store and Apple App store use buttons below:

Onmisbaar
BlindGuide Augmented Reality App
Blog posts
(Nederlands) Nieuws archief
Go to Top
We use cookies on our website to give you the most relevant experience by remembering your preferences and repeat visits. By clicking “Accept”, you consent to the use of ALL the cookies.
Cookie settingsACCEPT
Manage consent

Any cookies that may not be particularly necessary for the website to function and is used specifically to collect user personal data via analytics, ads, other embedded contents are termed as non-necessary cookies. It is mandatory to procure user consent prior to running these cookies on your website.